Salvatrucha is a “salvadoran female. (male: salvatrucho). Long before the "Mara Salvatrucha" became prominent, the terms "Salvatrucha" and "Salvatrucho" were commonly used to denote somebody originating from El Salvador.” - urbandictionary.com

"The president of El Salvador, Nayib Bukele, has said criminal gangs are taking advantage of the coronavirus pandemic after more than 50 people were killed between Friday and Sunday. He authorised the police and army to use lethal force to curb the violence. He also ordered a 24/7 lockdown for imprisoned gang members, arguing that many of the murders were ordered from behind bars.(…) El Salvador's security minister said the idea behind making rival gang members mix was so as to break up lines of communication between members of the same group and thereby limit their ability to plan attacks. Before President Bukele came to power, members of the two rival gangs that are behind much of the violence in El Salvador - Mara Salvatrucha and 18th Street gang - were housed in separate prisons in order to prevent deadly prison fights. But President Bukele put an end to that arrangement, arguing it allowed the gangs to impose their own rules and take control of "their" prison to the extent that they would continue running their criminal enterprises from the inside, including ordering murders of prison staff and their family members. As part of the new, more restrictive prison regime, inmates' communication was cut off, with wifi signals being scrambled and cell phones seized." - BBC News - April 2020

(or MS-13) A highly criminal and violent gang founded in Los Angeles since the 1970s, initially intended to protect Salvadoran immigrants from other gangs in Los Angeles area – His members were partly deported to El Salvador after the Salvadoran Civil War in 1992, and spread all over North and Central America.

A form of gang originating in the United States, then spreading to El Salvador, Honduras or Guatemala. The best known are Mara Salvatrucha and their rivals Calle 18. 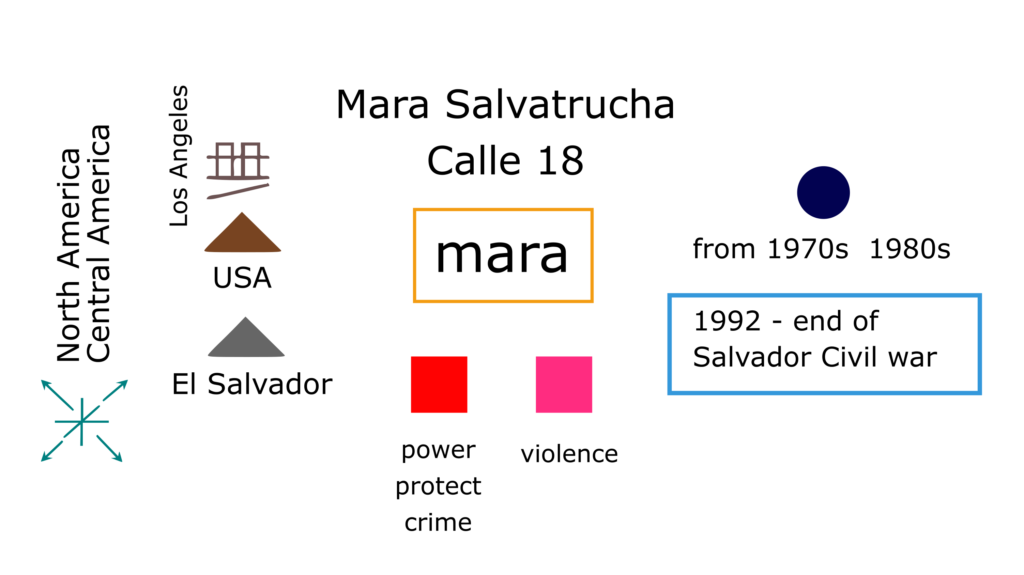